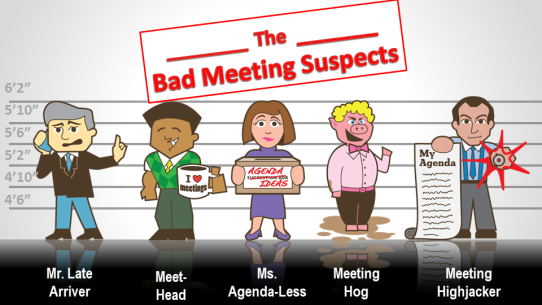 Look familiar?  You’ve probably dealt with one or more of these bad meeting suspects before.  Maybe we called them by different names or saw them in different forms, but either way we’ve all seen them.

They’ve interrupted your presentations, hijacked your discussions and played Angry Birds on their phones across the table from you. In one way or another they’ve helped make a good meeting turn bad.

Now it’s time to put names to faces in an effort to help you tackle some well known meeting villains.

Superhero Meeting Powers
We’ll feature each meeting villain in a series of coming posts.  Since we can’t be there to help in person, we want to give you the abilities (super powers, if you will!) to deal with these meeting villains first hand.