Posted by Jeffrey Steinke | August 14, 2012 | Business Tips | One Comment
0
Back in the mid 90’s my family received an odd gift from a close family friend – a video phone.
He worked at AT&T at the time. He’d snagged of one of their new demo video phones to play around with when he quickly realized Problem #1: Video phones were worthless if no one else had one. 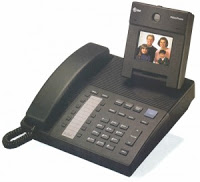 It’s easy to scoff at the thing now. I think we used it maybe three times ever. And it wasn’t so much a “video” phone as it was a collection of still images that would update every 30-60 seconds. Remember connection speeds back then?
The screen…well HD was still years away.Like our good friend realized, since no one else we knew had a video phone it just collected dust.
And look at the marketing! Is this family having a video call or posing for Glamour Shots?!

Teleconferencing Has Come a Long Way

Think about that first video phone compared to what we have now.

Services like Skype came out that made it insanely cheap to talk to anyone, anywhere in the world.

And now there are dozens of video chat/screen sharing combo solutions, from the ultra high end (and expensive) Cisco TelePresence to the free (yet still feature rich) offerings like join.me, Meeting Burner, Meetings.io, Google+ Hangouts, you get the point… Even while writing this post a new article from Wired popped up showcasing conference call startups.

And remember that first video phone? I’ll take iChat instead, thank you.

The Double. It’s an intriguing mashup of a robot + a video phone.

It’s fully remote controlled, letting you freely move it around any distant location, enabling you to see, hear, show, and talk to anyone, anywhere.

Oh and all from your iPad.

My first reaction is: this is really cool!

My second reaction is a bit more tempered: ok so this may be cool, but is it anything more than a toy?

The key thing setting it apart from a regular conference call is its mobility. So do you need to buy a Double for your daily status call? Probably not.

But maybe there are some practical applications for this thing…aside from having a creepy likeness of yourself to spy on your office-mates while you’re out of the office.

Touring Factory Floors
This is actually why the Double was created. The Double team was initially working with Chinese manufacturers but became frustrated without being able to see the factory floor. Their solution turned into a pivot for the whole company.

New Home Buyer Virtual Tours
How cool would this be? Take a virtual tour of a home that’s for sale without having to be there. Especially useful for cross-country moves.

Social Dressing Rooms
When buying new clothes you always need a second opinion, right? Next time you’re shopping alone use the Double to show a full 360 view of your new outfit to help your friends give you the go/no-go from anywhere.

In addition to the mobility, the other key to me is the price point: $1,999. Obviously this isn’t cheap, but it’s not outrageously expensive either. Very reasonable for an early-adopting real estate agent or retail store.

So what about you? Would you want a Double and if so, how would you use it?

UPDATE: Hope you didn’t get too excited. Looks like The Double is sold out till 2013.